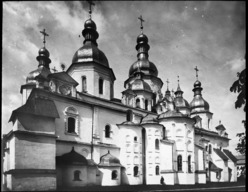 The cathedral was founded by Yaroslav the Wise in 1037 in the centre of Old Kiev and represents the greatest artistic achievement of Kievan Rus’. The original design was influenced by Hagia Sophia in Constantinople (Yaroslav’s sarcophagus in the cathedral is also probably of Constantinopolitan manufacture), but there are also elements derived from early Russian wooden architecture. The entire building was covered by a sophisticated system of vaults and arches, and was crowned with 13 domes representing Christ and his Twelve Apostles. This feature departed from any Byzantine prototype and was probably derived from Russian wooden architecture, such as the cathedral of St Sophia at Novgorod (989; destroyed 1045). It was restored in 1634 and reconstructed in the early 18th century by Metropolitan Pyotr Mogila, who added new domes and four subsidiary apses, thus giving it a Baroque appearance. There are mosaics and wall paintings in the interior from the 11th century. It is a UNESCO World Heritage Site.