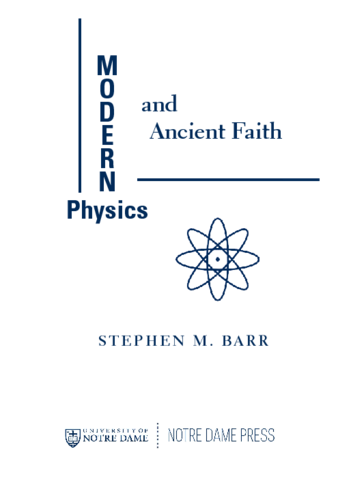 A considerable amount of public debate and media print has been devoted to the “war between science and religion.” In his accessible and eminently readable new book, Stephen M. Barr demonstrates that what is really at war with religion is not science itself, but a philosophy called scientific materialism. Modern Physics and Ancient Faith argues that the great discoveries of modern physics are more compatible with the central teachings of Christianity and Judaism about God, the cosmos, and the human soul than with the atheistic viewpoint of scientific materialism.

Scientific materialism grew out of scientific discoveries made from the time of Copernicus up to the beginning of the twentieth century. These discoveries led many thoughtful people to the conclusion that the universe has no cause or purpose, that the human race is an accidental by-product of blind material forces, and that the ultimate reality is matter itself. Barr contends that the revolutionary discoveries of the twentieth century run counter to this line of thought. He uses five of these discoveries-the Big Bang theory, unified field theories, anthropic coincidences, G\00F6 del’s Theorem in mathematics, and quantum theory-to cast serious doubt on the materialist’s view of the world and to give greater credence to Judeo-Christian claims about God and the universe.

Written in clear language, Barr’s rigorous and fair text explains modern physics to general readers without oversimplification. Using the insights of modern physics, he reveals that modern scientific discoveries and religious faith are deeply consonant. Anyone with an interest in science and religion will find Modern Physics and Ancient Faith invaluable.