Authoritarian Persistence and Regime Change in the Middle East and North Africa: Autocrats, Opposition, and Coalitions 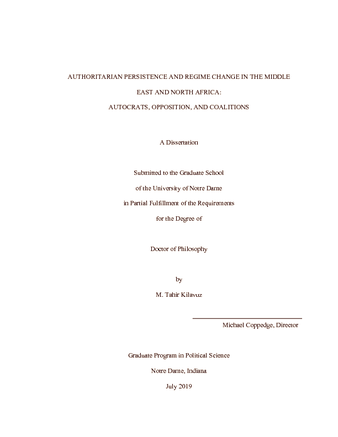 Authoritarianism has prevailed and the “democracy gap” persisted over the past century throughout the Arab Middle East and North Africa (MENA). Despite persistence of authoritarianism in the region, there is some variation in regime trajectories. The region has witnessed several authoritarian breakdowns over the last decades; yet, experiencing a breakdown does not always guarantee a democratic transition. Among handful democratic transition attempts in the region, only a single country, Tunisia, has successfully completed its transition to democracy. Why are most of the MENA autocracies so durable? What are the causes of such variation in the regime trajectories in the MENA? Why has not democracy taken root in the MENA even when there are transition attempts?

This dissertation seeks to understand regime persistence and change in the MENA comprehensively, in terms of both temporal and geographical coverage. Using fieldwork and experimental data and relying on qualitative and quantitative analysis, the study distinguishes between the triggers of authoritarian breakdowns and the reasons behind democratic transitions.

In the first part of the dissertation, I explore the conditions under which some MENA autocracies become more vulnerable to breakdowns than others. I argue that the regimes that successfully balance between authoritarian control and power-sharing tend to be more durable. While most cross-regional studies often explain authoritarian durability in the MENA with structural and cultural factors, such as natural resources and Islam, I find that these factors do not accurately account for the variation within the region. In contrast, institutional factors explain why some authoritarian regimes break down while others survive longer. Through a survival analysis of all Arab MENA autocracies, I demonstrate that monarchy as a regime type, a strong coercive apparatus, and the ability to introduce liberalization reforms help regimes to survive longer by determining the levels of authoritarian control and power-sharing.

The second part of the dissertation examines the factors that impact the success and failure of a transition attempt in the MENA by focusing on the question of why and how elites cooperate during a transition process. Based on 12 months of extensive fieldwork on Algeria, Egypt and Tunisia where transitions to democracy were attempted, I argue that the type and nature of elite interactions under authoritarianism determine a country’s trajectory during the transitions. Looking at testable characteristics that affect the likelihood of elite cooperation and following a game theoretic logic, I posit that the experience of building a successful opposition coalition under authoritarianism helps the elites to overcome commitment problems by establishing organizational capital, trust, and a shared vision. When a transition process starts, the elites with such resources can make a stronger credible commitment to cooperation. I use an original public opinion survey with embedded experiments that I conducted in Algeria to illustrate the role of bridging on overcoming commitment problems to cooperation. I further draw on more than 120 interviews with key actors such as a former president, several prime ministers, ministers and party leaders to validate the argument about the importance of opposition coalition building on transition process.

This dissertation project makes several contributions. First, unlike most studies, I break the transition process down into phases and explore whether and how different factors affect regime change in each of these different stages of transitions. Second, my research covers the whole MENA over a long period of time and provides the first systematic account of regional variation in both authoritarian breakdowns and transitions. Third, I employ multiple methods to provide experimental, quantitative, and qualitative evidence on a part of the world that is marked by the scarcity of data. Therefore, this project offers a systematic, comprehensive and step-by-step explanation of the process of regime persistence and change in the MENA.