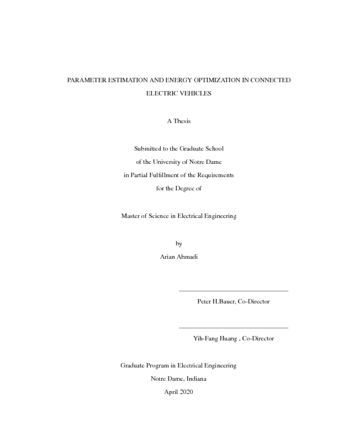 Electric Vehicles (EVs) are gaining in popularity due to their many advantages over conventional drive trains. However, it has been shown that the driving range of EVs is notoriously sensitive to environmental conditions, especially wind conditions and street surface properties. In this thesis, we present a novel approach to assessing these critical environmental conditions without relying on physical sensors. The proposed approach employs distributed estimation in networked vehicles to estimate parameters that characterize the EV’s environmental conditions which impact the range of the EV. The parameters to be estimated are the highly uncertain quantities such as wind speed and rolling resistance. In essence, our approach employs the EV’s as sensors. Key to this approach is the set-membership filtering (SMF) method, which is quite different from the traditional adaptive filtering methods. The SMF aims to meet a specification on the magnitude of the filtering errors, instead of minimizing the time average or ensemble average of the squared filtering errors. Moreover, the SMF algorithms feature a data-dependent selective update of parameter estimates, which proves to be more effective in estimating the environmental parameters of networked vehicles. The estimation schemes developed here use a vehicle longitudinal model and commonly available vehicle sensor signals. Simulations are performed to demonstrate the advantages of the proposed algorithms in terms of computational complexity, residual parameter uncertainties, and steady-state mean-squared errors in comparison to existing algorithms.

In the second part of the thesis, we use the estimated parameters to propose energy-optimal speed trajectories in typical urban driving situations, i.e., from stop-to-stop that minimize energy usage in EV’s. It has been shown that, energy savings up to 80% are achievable if the information about traffic flow and vehicle parameter set is known. In the proposed optimization algorithm, transportation energy is the only term in the cost function and all other conditions such as acceleration and average speed only appear as constraints. Mainly, the effect of the powertrain efficiency map on energy optimal speed trajectories is investigated. A variety of different efficiency maps are explored and the energy optimization process is carried out. In addition, the impact that vehicle and segment parameters as well as average speeds have on the savings are explored. It is shown that while the efficiency maps can have a significant impact on the overall transportation energy, they have little impact on the shape of the optimal speed profiles. This shows the robustness of the proposed optimization algorithm with respect to the powertrain efficiency. The most significant benefits of the proposed algorithm can be summarized as follows: Increasing the electric vehicles range of operation, reduction in air pollution, emissions and usage of fossil fuels.