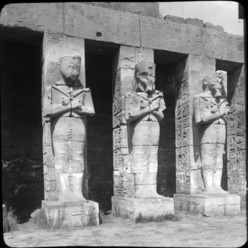 Karnak was the religious centre of ancient Thebes and site of a temple complex, covering 100 ha on the east bank of the Nile. Karnak was linked inseparably with Thebes, the Egyptian empire and the concept of pharaoh’s divine power. The god Amun-Re was thought to send out from Karnak an energy on which depended the rhythm of the seasons, the Nile floods, crops, fertility and Egyptian order, for which his son the pharaoh stood as guarantor. Amun was pre-eminent among the several divinities worshipped at Karnak. He formed part of a divine triad with a secondary goddess associated with the lioness-goddess Mut, and the god-son Khons. Karnak consists of three precincts dedicated respectively to Amun, Mut and Montu (an ancient god of war, who later became regarded as an aspect of Amun). The precincts were walled to exclude the sacrilegious from the sanctuaries of the divinities. Within these walls are the remains of temples, obelisks, colossi, shrines, lakes, shops and priests’ dwellings. The walls of the sanctuaries are covered with representations of divinities, hieroglyphic texts and the cartouches of the kings who built them.