Arch of Titus: Distant context view on the Via Sacra looking into Forum 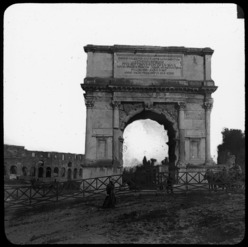 The opposite side of the Arch of Titus received new inscriptions after it was restored during the pontificate of Pope Pius VII by Giuseppe Valadier in 1821. The restoration was intentionally made in travertine to differentiate between the original and the restored portions.

The classic example of the single-aperture arch is the monumental Arch of Titus in the Forum Romanum. Relief panels in the passageways depict the triumph of Titus (Triumph of Titus and Spoils of Jerusalem), and a rectangular panel in the soffit of the arch shows his apotheosis. (The arch was built by the emperor Domitian shortly after the death of his older brother Titus.) The Arch of Titus seems to have inspired the similar but more richly decorated Arch of Trajan (AD 114) at Benevento.