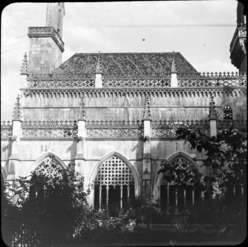 The cloister was built under the architect Fernão de Évora between 1448 and 1477. The arcade screens, in the Manueline style, were added later by Mateus Fernandes. Two different patterns alternate, one with the cross of the Order of Christ, the other with armillaries.

Former Dominican priory, dedicated to S Maria da Vitória, about 10 km south of Leiria, Portugal. Founded by John I (João I, reigned 1385-1433), the first king of the Aviz dynasty, to celebrate the Battle of Aljubarrota (1385), it is the most representative and important example of Late Gothic architecture in Portugal. The first architect, from 1388 to 1402, was Afonso Domingues, who drew up the plan and partly built the church and cloister. It is a large complex containing church, cloister, chapels, chapter house and other conventual buildings and a royal pantheon (the Capela do Fundador). Styles of Late Gothic used include Flamboyant, Perpendicular and Manueline. It is a UNESCO World Heritage Site.