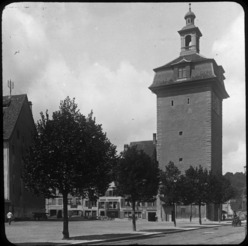 The northern gate of the city is the Schwabentor. The tower itself was first mentioned as the “new tower” in 1361, built as a defense against the Swabians. It was later added to in 1555 and 1608. In 1782 it was capped with a Mansard roof and cupola (and clock with chimes); these were destroyed by fire in 1932 and in 1933-1935 it was restored back to an earlier version, with a simple hipped roof.