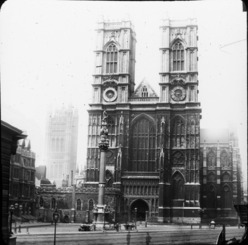 The column in front is the Westminster School Crimean War Monument, 1861 by John Birnie Philip and Sir George Gilbert Scott.

The abbey’s two western towers were built between 1722 and 1745 by Nicholas Hawksmoor, constructed from Portland stone to an early example of a Gothic Revival design. Further rebuilding and restoration occurred in the 19th century under Sir George Gilbert Scott. “In 1723, on the death of Wren, he became architect to Westminster Abbey, the west gable (1735) and towers (1734-1745) of which are his; they also are Gothic in texture and feeling rather than in detail. On this occasion the retiring side of his character extended to architecture, and few post-medieval completions have been so sympathetically successful.”