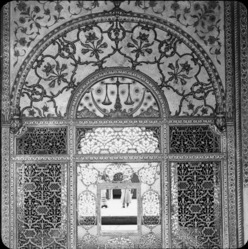 The room is popularly referred to as “Saman Burj,” bedroom of the princess, although the scales would indicate a formal reception room.

Built by the emperor Shah Jahan (reigned 1628-1658) between 1639 and 1648, the Lal Qil‛a was the citadel of his new city Shahjahanabad. The complex has many buildings. The Khas-Mahal (“private house”) consists of three parts. The set of three rooms facing the Diwan-i-Khas is called the Tasbih-Khana (“chamber for telling beads”) and was used for private worship by the emperor. The three rooms behind it are known as Khwabgah (“sleeping chamber”). To its south a long hall with its painted walls and ceiling and a perforated screen on west is known either as Tosh-Khana (“robe chamber”) or Baithak (“sitting room”). There exists a beautiful marble screen at the northern end of these rooms carved with a Scale of Justice suspended over a crescent surrounded with stars and clouds. There is an inscription over the southern arch of the Khwabgah, stating that the building was begun in 1048 A.H. (1639) and completed in 1058 A.H. (1648).