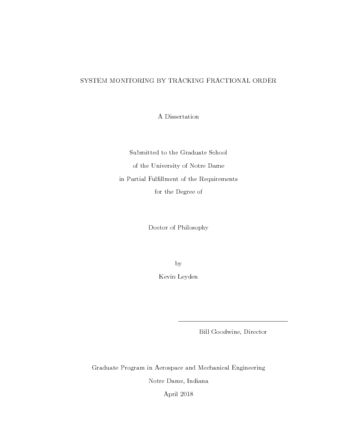 Mechanical systems are often combinations of many interacting components. Examples of such systems include gas turbines, washing machines, machine tools, and cars. These systems’ vibrations are commonly analyzed with numerical methods, but the complexity makes mathematical analysis challenging. This research has pursued a mathematical framework to relate applied force and displacement in mechanical systems of this type by modeling them as networks.

Fractional differential equations are a simplifying tool for complex systems. The overall dynamics of a mechanical (or mechanically behaving) system with many moving parts can be modeled as having a fractional order, circumventing any need to include the many intermediate degrees of freedom explicitly. Damage to a complex system of this type can be assessed by measuring the change in its fractional order.

This research has yielded a system identification procedure to compute fractional-order models from frequency data. In analyzing simulated systems representing multi-robot vehicle formations, shifts in fractional order are evident in response to changes in both the severity and the location of damage. These results support the primary goal of this research: a monitoring method that can diagnose damage without complete sensor coverage, instead measuring fractional order to infer operational changes.

If fractional calculus can be likened to monomials in the derivative D - for example, first derivative D, second derivative D squared, and half derivative D to the power ½ - implicit operators are the next frontier: general expressions in D. In this research, implicit operators have been used for concise models describing the dynamics of complex vibrating systems. These models are promising for ease of accurate simulation and control of such systems. Along with this mathematical extension, the concept of fractional order as a defining parameter in modeling and control has been extended toward application in simulated trajectory-following control of a dynamically walking two-legged robot. Both extensions are meant to demonstrate the breadth of previously undiscovered utility for fractional and implicit operators in engineering.