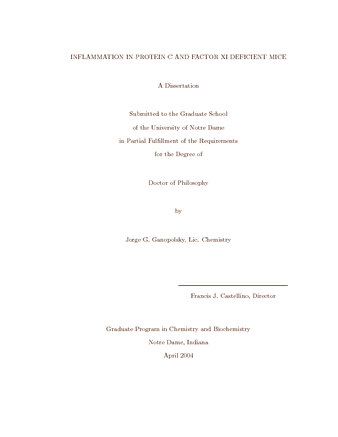 The preservation of blood flow is essential for the delivery of vital nutrients and metabolites to the different organs of the body. In case of vascular damage, well equilibrated coagulation and fibrinolysis are required to maintain homeostasis so that repair occurs promptly and efficiently, without severe stenosis or thromboembolism. Anticoagulant protein C (PC) is an important serine protease that down-regulates thrombin generation by proteolytic cleavage of coagulation factors (F)VIIIa and FVa, cofactors that participate in the Xase and prothrombinase complexes, respectively. Additionally, it was shown that PC behaves as an anti-inflammatory agent when it binds to its receptor EPCR and/or the protease activated receptor PAR-1, diminishing cytokine and chemokine production by endothelial and inflammatory cells. Administration of PC to patients undergoing septic shock, as well as animals in different models of inflammation, not only decreased the inflammatory response but also improved the survival effectively. On the contrary, individuals with hereditary PC deficiencies have propensity to coagulopathies that could result in disseminated intravascular coagulopathy (DIC) and death. Moreover, PC deficiency is a major risk factor in atherothrombosis and atherogenesis. Nonetheless, the response to inflammatory events has not been extensively studied in PC deficient individuals and therefore needs to be further examined to clarify the role of PC in such processes. Recently, mice with PC deficiencies were generated by targeted complete gene deletion and replacement by a neomycin resistant cassette. As a result, mice with a homozygous deficiency ($PC^{-/-}$) survived up to 5 days after birth due to severe coagulopathies with consequent hepatic and cerebral necrosis. Thus, $PC^{-/-}$ mice were not viable for coagulation and inflammatory studies. To analyze whether an additional deficiency in a procoagulant such as FXI alleviates the hypercoagulable state induced by a PC deficiency and hence improves the viability of these mice, $PC^{+/-}$ mice were crossbred with $FXI^{-/-}$ mice in successive rounds. Consequently, the generated mice with a combined deficiency in PC and FXI ($PC^{-/-}FXI^{-/-}$) presented improved survival and lived up to 100 days. Nonetheless, these animals presented symptoms of coagulopathies with fibrin(ogen) deposits and fibrosis as well as increased inflammation in the major organs. Additionally, the supplementary FXI deficiency rescued $PC^{-/-}$ embryos from pre-natal coagulopathies in the late gestational stage proving the importance of FXI in the activation of coagulation in this developmental period. Unfortunately, only a small fraction of $PC^{-/-}FXI^{-/-}$ mice survived birth which rendered them unsuitable for inflammatory-challenge studies. Subsequently, systemic and focal inflammatory responses were studied in mice with heterozygous deficiencies in PC. For this purpose, we chose the cecal ligation and puncture (CLP) model of sepsis, a systemic inflammatory response syndrome, and the copper/silicone cuff model of arterial injury and inflammation.

In the sepsis studies, a partial deficiency in protein C conferred CLP-treated mice increased mortality in comparison with treated {it WT} mice. Plasma cytokine levels as well as cytokine expression in liver, kidney and lung were more elevated in $PC^{+/-}$ mice compared to {it WT} mice at 24 hours post-CLP surgery. Additionally, renal and hepatic damage were more severe in $PC^{+/-}$ treated mice relative to similar {it WT} mice. Hepatic and renal expression of PC as well as plasma levels of the protein decreased to under 50,\% of the original values in both {it WT} and $PC^{+/-}$ mice 24 hours after surgery, although a more significant diminution in these parameters was observed in $PC^{+/-}$ mice, relative to {it WT} mice. Further, up-regulation of coagulation and consumption of intrinsic coagulation factors was seen in both {it WT} and $PC^{+/-}$ mice to a similar degree. Hence, the difference in outcome of $PC^{+/-}$ and {it WT} mice after sepsis seems to be related to the anti-inflammatory properties of PC in contrast with its anticoagulant activity. Importantly, bradycardia and hypotension were more severe in $PC^{+/-}$ mice during septic shock which reveals a previously unknown activity of PC in the modulation of blood pressure, indeed indispensable for the survival of the animals during sepsis.

Arterial inflammation was more prominent in mice with a heterozygous PC deficiency after copper-silicone cuff placement around the left carotid artery. At an early time point, 7 days after cuff placement, the areas of the different arterial compartments in transversal sections of the arteries, presented no significant differences, although the percentage of inflammatory and proliferating cells was higher in $PC^{+/-}$ carotids, relative to {it WT} treated controls. At the chronic stage, 21 days after cuff placement, the areas of the different compartments were significantly larger in $PC^{+/-}$ carotids, as compared to {it WT} arteries. Additionally, arterial occlusion, cell proliferation, and inflammation were more elevated in $PC^{+/-}$ arteries. These results show the importance of PC in the modulation of initiation, progression, and resolution of arterial inflammation.

During the analysis of control $PC^{+/+}FXI^{-/-}$ animals in the characterization of $PC^{-/-}FXI^{-/-}$ mice, some surprising anomalies were found in the vasculature of $FXI^{-/-}$ mice. The arteries of these mice showed signs of vascular relaxation denoted by arterial dilatation and flattening, in opposition to the corrugated phenotype displayed by {it WT} arteries. In addition, endothelial integrity was occasionally compromised in $FXI^{-/-}$ arteries. Considering these observations and the evidence of increased granulocyte activation in $FXI^{-/-}$ cattle, we decided to include $FXI^{-/-}$ mice in the study of copper-induced arterial inflammation. As a result, arterial inflammation and cell proliferation were remarkably more elevated in $FXI^{-/-}$ arteries, compared to similar {it WT} arteries, at early and late time points. However, the areas of arterial transversal sections were larger in $FXI^{-/-}$ arteries than in {it WT} arteries, only in the earlier time point. These observations suggest that the initial condition of the arteries as well as the favorable pro-inflammatory state in $FXI^{-/-}$ arteries was important in the initiation of the arterial damage and repair. However, a deficiency in a pro-coagulant such as FXI may play a compensatory role in the progression of the disease, albeit the existing inflammatory propensity. We believe that elevated kallikrein and bradykinin (BK) generation are crucial in the development of the arterial pathology in $FXI^{-/-}$ mice, balancing the up-regulation of inflammation through complement and neutrophil activation, with the enhancement of fibrinolysis or decrease of blood pressure through BK and its cellular receptor.