The Breviary of Lucca, Biblioteca Arcivescovile, MS 5: The Use of the Cathedral of Tyre 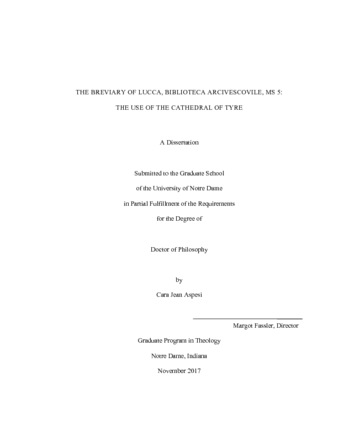 This study seeks to clarify the date, nature, and probable origin of a noted breviary currently preserved as part of a greatly misunderstood manuscript, Lucca, Biblioteca Arcivescovile, MS 5. It argues, from a close study of the manuscript’s hands and codicological structure, that the breviary of Lucca, Bib. Arc. MS 5 was once an independent manuscript, not part of the rest of the liturgical material now appended to it, but created sometime between 1125-1150. The notation of the breviary, taken together with the breviary’s primary hand and curious red neumes added by the rubricator, suggests that the breviary may have been compiled by a scribe from Chartres, probably a cantor.