Beyond the Inquisition: Ambrogio Catarino Politi and the Origins of the Counter-Reformation 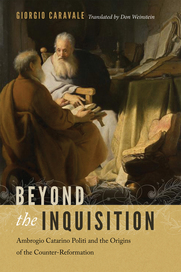 In Beyond the Inquisition, originally published in an Italian edition in 2007, Giorgio Caravale offers a fresh perspective on sixteenth-century Italian religious history and the religious crisis that swept across Europe during that period. Through an intellectual biography of Ambrogio Catarino Politi (1484-1553), Caravale rethinks the problems resulting from the diffusion of Protestant doctrines in Renaissance Italy and the Catholic opposition to their advance. At the same time, Caravale calls for a new conception of the Counter-Reformation, demonstrating that during the first half of the sixteenth century there were many alternatives to the inquisitorial model that ultimately prevailed.

Lancellotto Politi, the jurist from Siena who entered the Dominican order in 1517 under the name of Ambrogio Catarino, started his career as an anti-Lutheran controversialist, shared friendships with the Italian Spirituals, and was frequently in conflict with his own order. The main stages of his career are all illustrated with a rich array of previously published and unpublished documentation. Caravale’s thorough analysis of Politi’s works, actions, and relationships significantly alters the traditional image of an intransigent heretic hunter and an author of fierce anti-Lutheran tirades. In the same way, the reconstruction of his role as a papal theologian and as a bishop in the first phase of the Council and the reinterpretation of his battle against the Spanish theologian Domingo de Soto and scholasticism reestablish the image of a Counter-Reformation that was different from the one that triumphed in Trent, the image of an alternative that was viable but never came close to being implemented.