Roman ruins at Timgad: Overall view looking towards the Capitoline Temple in the distance 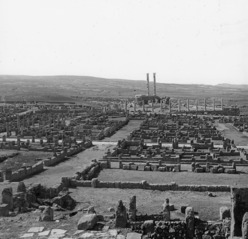