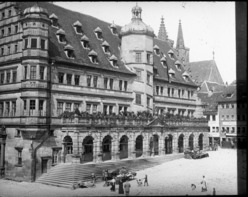 The rusticated loggia was added in 1681.

The Rathaus has a gabled south façade, the left gable belonging to the 13th-century wing, the right to the Renaissance wing (1570-1578) by Leonhard Weidmann; the rusticated loggia was added in 1681. Opinions vary concerning the extent to which Weidmann’s scheme was followed, as he did not qualify as a master craftsman until 1575. The town hall, one of the finest in Franconia, reconciles the traditional high gabled façade with the heavily stressed horizontals of the long side elevation, exposed to the market square, by locating a three-storey oriel at the angle. Weidmann’s work is seen in the Gothic wing, too, where he carved the bar in the courtroom.