Museum of Queen Berengaria of Navarre: Grille work displayed in the houses 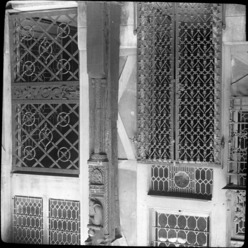 Bérengère (ca. 1165-1230) was Queen of the English as the wife of King Richard I of England. Musée de la reine Bérengère is a museum of Le Mans history located in three half-timbered merchant’s houses, ca. 1230. The museum is located on the old High Street that served to connect all the medieval city, both canonical and aristocratic houses. It is in the area known as la cité Plantagenêt. After being seized by William I of England, Le Mans fell into the hands of the Plantagenets in the mid-12th century. The houses were restored by Adolphe Singher (1836-1910) and acquired by the city in 1924.