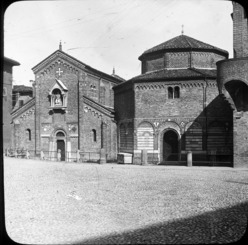 Church of the Holy Crucifix (the largest church) is located out of view, to the right (corner visible).

This group of monastic buildings dates chiefly from the Romanesque period, although the complex originated much earlier, and fragments of earlier buildings survive. The complex as a whole is documented from the 9th century with the title ‘Santo Stefano detto Gerusalemme’, or ‘Sancta Gerusalemme’. None of the surviving churches now bears the name of S Stefano. It is locally known as Sette Chiese (“Seven Churches”). According to tradition, it was built by Saint Petronius, who was bishop of the city during the 5th century. The church of St. John the Baptist (or of the Holy Crucifix) dates from the 11th century, while that of the Holy Sepulchre from the 5th (renovated in the 12th century), as well as that of San Vitale e Agricola (renovated in the 8th and 11th centuries). Bologna came under Byzantine rule in the 6th century, before passing to the Lombards and then, in 765, to the Papacy. A 12th century portico known as Cortile di Pilato connects the other buildings to the church of the Holy Trinity (13th century). There is a Benedictine cloister and monastery.