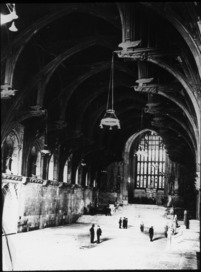 This is the only surviving part of the original Palace of Westminster, dating from 1097.

On 16 October 1834, most of the Palace was destroyed by fire. Only Westminster Hall, the Jewel Tower, the crypt of St Stephen’s Chapel and the cloisters survived. A Royal Commission was appointed to study the rebuilding of the Palace and decided that it should be rebuilt on the same site, and that its style should be either Gothic or Elizabethan. A heated public debate over the proposed styles ensued. It was decided that neo-Classical design, similar to that of the White House and Congress in the USA, was to be avoided due to its connotations of revolution and republic. Gothic design embodied conservative values. “On 29 February 1836 the first premium was given to Barry. The great task of rebuilding the Palace was to occupy him for the rest of his life. At his death it was still unfinished and was continued by his son E. M. Barry until 1870. The remarkable features of Barry’s design were its confident Gothic detail and ingenious plan, which brilliantly incorporated the remaining medieval buildings into a logical system of circulation. Barry constantly revised and improved his design so that the final result became a uniquely successful masterpiece, which, although in the Gothic style, was designed on classical principles with a system of repeating modules.”