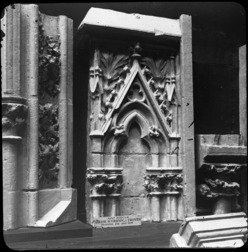 The collegiate church of St Urbain epitomizes the high degree of refinement and sophistication achieved by French Rayonnant architecture during the third quarter of the 13th century. St Urbain was founded by Pope Urban IV in May 1262 on the site of his birthplace. Although attempts have been made to attribute St Urbain to Jean Langlois, mentioned as ‘magister operis’ in a fabric account, it seems more likely that he was a financial official charged with disbursing papal funds. Thus the identity of the gifted master of this exceptional monument remains unknown. The nave clerestory and west front were finished only in 1905 as part of the general restoration of the building.