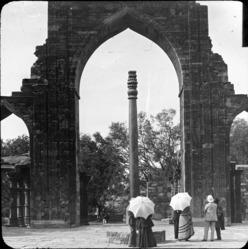 An inscription on the eastern gate of the Quwwat al-Islam Mosque hints at the lost splendour of ancient (Tomara) Delhi when it states that 27 temples were destroyed and their stone reused to build the mosque complex. In the middle of the mosque’s courtyard is the Iron Pillar (ca. 400), a relic of the Gupta period cast in a pure, non-corrosive iron. According to the Sanskrit inscription, the tapering column (7.21 m) was a victory standard (Skt dhvaja) in honor of Vishnu and was probably crowned by a garuda figure, which no longer survives. Qutb al-Din Aybak probably placed (or retained) the standard as a victory symbol when he founded the mosque in 1192.