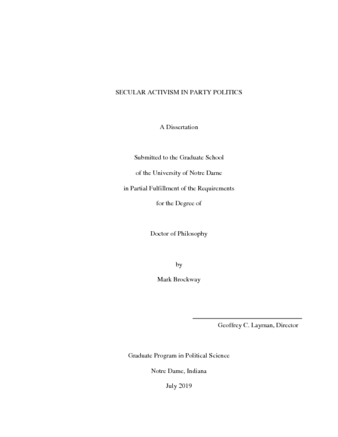 In 2018, secular, or nonreligious individuals, became the largest “religious” group in America surpassing Evangelical Christians. Their rise has been meteoric. Beginning in the early 1990s, seculars now make up nearly 25 percent of the population. This trend is also political as seculars tend to identify with the Democratic Party and take liberal positions on cultural issues such as same-sex marriage and abortion. Seculars in American politics may be especially impactful as previous research has shown that politics, and the connection between religion and politics, drives individuals away from religion. But despite attention to the political causes of rising secularism in the United States, much less is known about the political consequences. If a rejection of the religious right in the Republican Party drives individuals away from religion, then secularism may also push individuals toward the Democratic Party. The tendency of seculars to be Democratic coupled with their rise as a proportion of the population may point to a long-term electoral advantage for the Democratic Party. Currently, however, the Democratic Party has been hesitant to run secular candidates for public office and speak openly about secularism and nonreligion. Despite the strong presence of seculars in the Democratic Party, most Democrats are religious and many, including Black Protestants and Hispanic Catholics, are highly religious.