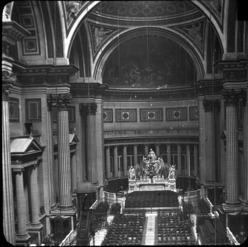 At the rear of the church, above the high altar, stands a statue by Charles Marochetti depicting St Mary Magdalene being carried up to heaven by two angels. The half-dome above the altar is frescoed by Jules-Claude Ziegler, entitled The History of Christianity, showing the key figures in the Christian religion with (a sign of its Second Empire date) Napoleon occupying centre stage.

From 1806 Vignon concentrated on completing the Madeleine, a church that had remained unfinished since the days of the ancien régime. In 1806 Napoleon ordered that a Temple de la Gloire de la Grande Armée should be erected there and Claude-Etienne Beaumont (1757-1811) emerged as winner of the limited competition (1807), but he was superseded by Vignon on Napoleon’s orders. He designed a vast peripteral Corinthian temple, with a single huge, barrel-vaulted interior, to form a counterpart to the distant Chambre des Députés by Bernard Poyet. Building work, however, never started; in 1815, Louis XVIII contemplated using the site for the Chapelle expiatoire dedicated to Louis XVI and another competition was held (1816), to which Vignon contributed. The enterprise was judged too expensive and it was decided to build the Madeleine as a parish church. Vignon retained the commission using his designs of 1807, subject to modifications, which included roofing the nave with three domes. The masonry of the exterior was virtually finished by 1828 when Vignon died, and the completion of the interior (1828-1842) was supervised by Jean-Jacques Huvé (1783-1852).