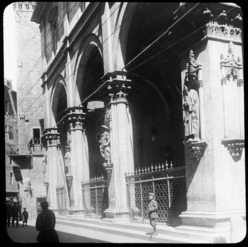 The architect of the loggia is Sano di Matteo, built between 1417 and 1428 under his direction, then from 1428 to 1444 by Pietro del Minella in a transitional style between Gothic and Renaissance. Federighi was commissioned to add three sculptures of saints in 1457 (three of the four ancient town’s patron saints, San Savino, Sant'Ansano and San Vittore). A marble bench (ca. 1459-1464; in situ) for the Loggia, ornamented with reliefs of ancient Roman heroes on the front and the nursing she-wolf with her human charges on the reverse, has also been attributed to Federighi. The heavy foliated carving of the all'antica garlands demonstrates the sculptor’s assimilation of both classical form and technique. The upper floor of the loggia was added in the 17th century.