The Forgotten Woman's Bible: Katharine Bushnell, Lee Anna Starr, Madeline Southard, and the Construction of a Woman-Centered Protestantism in America, 1870-1930 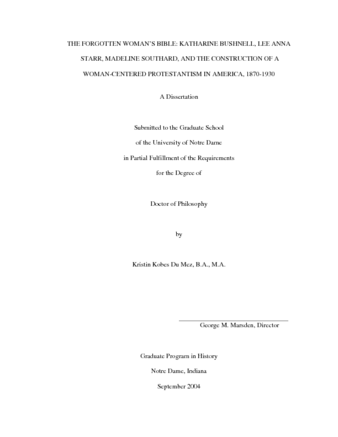 This study examines the woman-centered theologies and social visions of three late-nineteenth- and early-twentieth-century American Protestant women, Katharine C. Bushnell, Lee Anna Starr, and M. Madeline Southard. All three women constructed sophisticated feminist theologies and social commentaries, and through retranslation and reinterpretation created new biblical narratives. As Methodists located between the poles of Protestant liberalism and conservatism, they espoused the authority of the Bible and the literal truth of the scriptures, but they also readily employed the tools of modern scholarship and critical methods to peel away centuries of male bias and uncover what the word of God truly revealed on issues of gender, sexuality, and morality.

Their woman-centered theologies provided the foundation for a new sexual ethic and social order. As participants in social reform movements" particularly in temperance work and in the social purity movement" they had become convinced that faulty religious teachings were at the root of modern social problems, and they turned to theology to expose and subvert what they perceived as the centuries-long manipulation of the faith by male translators and theologians. In their woman-centered theological reflections, Bushnell, Starr, and Southard rejected Victorian social arrangements, conventional views of women’s virtue, traditional marriage relationships, and the cultural and religious idealization of motherhood. Although they failed to achieve the widespread social and religious reform they had anticipated, they nonetheless provide examples of modern Protestant, woman-centered approaches to issues of gender and morality.

This dissertation brings together the study of Protestantism and feminism in modern American history, investigating the crucial transitional period of the late nineteenth and early twentieth centuries. And it explores the implications of these historical developments on contemporary American feminism and modern Protestantism, and on twentieth-century American culture.