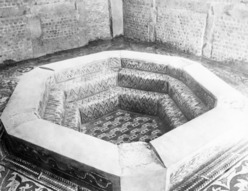 There were two large Christian complexes in the town, both of which contained a baptistery, one associated with the Donatist sect, and the other which may have belonged to the Catholic church. The Donatist cathedral baptistery (4th century CE) has a hexagonal, 3-step immersion baptismal font richly decorated with mosaics.