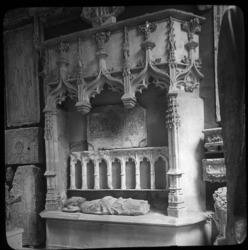 The Musée du Petit-Palais houses fragments from the tombs of John XXII and Innocent VI, a recumbent statue of Pope Urban V, and the tomb of Cardinal Philippe de Cabassole. This view shows an earlier display in the Museum Calvet, Avignon. Only the effigy is from Urban’ original tomb.

The Musée du Petit-Palais was originally the bishop’s palace and it is where the first two Avignon popes lived before the Palais des Papes was constructed, including Pope John XXII, who had been Archbishop of Avignon. It lies outside of the walls of the Palais des Papes on the north side of the square beyond the Cathedral. Named Petit Palais to distinguish it from the Palais des Papes, it was built before the Western Schism by Cardinal Bérenger Fredoli the Elder ca.1318-1320, with four wings around a cloister and a service court. The palace and a few neighbouring buildings were bought on de Frédol’s death in 1323 by Cardinal Arnaud de Via, nephew of the reigning Pope. However, de Via then died in 1335 and the building remained vacant until Pope Benedict XII bought it for use as the bishopric. Giuliano della Rovere (the future Pope Julius II) carried out restoration work, giving the Palace more or less its present appearance by 1503. Della Rovere arrived in Avignon in 1474, having been made bishop of Avignon.