A Comprehensive Analysis of the Behavior of Wireless Group Communication Systems 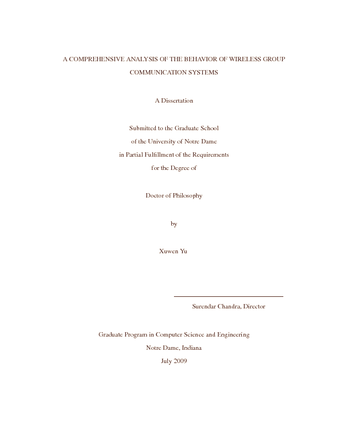 Modern laptops are resource rich with hardware resources rivaling that of desktops. Broadband wireless access is also becoming inexpensive and ubiquitous. Hence, wireless laptops are emerging as the primary computing platform for many users. However, this migration could seriously impact the viability of traditional group communication systems that were designed for users who used wired desktops. Ubiquitous wireless access allows users to be mobile and work from a number of different locations such as from home, work and from public venues. Even though the users can continue to collaborate with each other from any of these locations, the wireless user availability patterns might be different than was observed for wired desktop users. Systems that benefited from the ability of desktops to continue to participate in the group communications with other users even after the group member had left might suffer if laptops were offline for long durations while moving from one location to another.

In this dissertation, I expand on our understanding of the behavior of group communication systems to include wireless users. Wireless users work from different locations. Hence, I use the availability traces of a large number of users in a university, corporate lab, conference and in a hotspot federation for my investigation. I show that wireless users are available for shorter durations and are unavailable for longer periods than was observed for wired users. A long term analysis shows a trend towards shorter session and longer duration between sessions with significant node churn in all these scenarios.

Next, I investigate the implications of this observed availability for two classes of group communication mechanisms. First, I analyze Apple iTunes, a popular application that uses serendipitous sharing model and opportunistically accesses any contents that are currently available. I show the limitations of such synchronous sharing for wireless users. The temporal consistency of wireless users can provide reasonable availability for replicated objects, especially at the times of the day when users were typically active. Reliance on a server storage shows modest improvement. Using information about objects that are shared by iTunes users, I show that shared object annotations exhibit a Zipfian long tail distribution making them inappropriate for applications that require access to a specific object. I demonstrate that mechanisms that allow the user to specify classes of interesting objects are better suited for wireless serendipitous sharing.

For asynchronous systems, I show that the fundamental impediment to the system performance is the wireless user availability behavior and node churn characteristics. I investigate the relative performance of several distributed as well as server mediated approaches. I show that pull mechanisms naturally randomize the times when updates are propagated and thus achieve better performance than push based mechanisms. For a given number of gossips, it is preferable to propagate updates to all available nodes rather than increasing the frequency while correspondingly reducing the number of nodes to propagate updates. I develop a practical adaptive approach that customizes the update frequency using the last session duration and show that this mechanism exhibits good performance when the required update frequency intervals are large.

My research results will allow wireless group communication system developers to choose the appropriate system parameters to satisfy their own application constraints.