Arch of Titus: Detail relief, The Spoils of Jerusalem 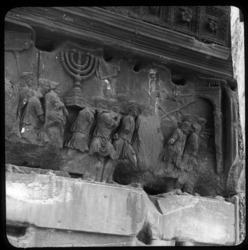 Soldiers depicted looting a menorah from the Temple of Jerusalem. The menorah depicted on the Arch served as the model for the menorah used on the modern emblem of the State of Israel.

The classic example of the single-aperture arch is the monumental Arch of Titus in the Forum Romanum. Relief panels in the passageways depict the triumph of Titus (Triumph of Titus and Spoils of Jerusalem), and a rectangular panel in the soffit of the arch shows his apotheosis. (The arch was built by the emperor Domitian shortly after the death of his older brother Titus.) The Arch of Titus seems to have inspired the similar but more richly decorated Arch of Trajan (AD 114) at Benevento.