Chichén Itzá: Interior view of a small temple at the site 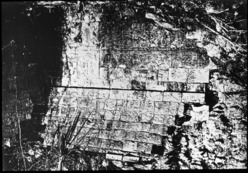