Belém Tower: Overall view of the tower with the bastion behind 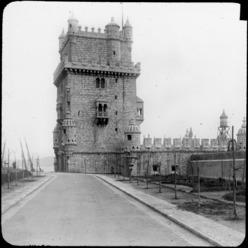 Underneath the turret in the north-west corner is the first European carving of the head of a rhinoceros, which is typical of contemporary Portuguese exoticism. The fort was originally an island but now stands close to the bank due to landfill.

Conceived by John II (reigned 1481-1495) to defend the entrance to Lisbon, the tower was erected by Manuel I. It was designed by Francisco de Arruda and was begun probably in 1514 and finished, with its artillery in place, by 1521. The Tower of Belém marks a turning-point in military architecture and a decisive adaptation to the new conditions imposed by the use of fire-arms. It is the first Portuguese polygonal bastion with two levels of gun-emplacements, one of casemates for large-calibre guns, the other a platform for smaller artillery. The five-storey tower is square. It is an UNESCO World Heritage Site.