Anuradhapura: Overall view of one of the temple complexes with domed dagoba 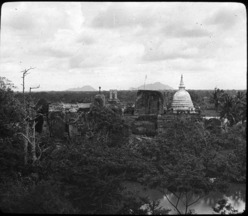 One of the ancient capitals of Sri Lanka, famous for its well-preserved ruins of ancient Lankan civilization; it was the capital of Sinhalese kings of Ceylon from the 4th century BCE, abandoned in 11th century CE due to Tamil invasions. The city is sacred to Buddhists (introduced to the country ca. 250 BCE) and has a sacred Bo tree (the Jaya Sri Maha Bodhi), believed to have grown from a sapling of the original tree where Buddha found enlightenment. Thuparama Dagoba, the oldest shrine in Sri Lanka, houses Buddha’s collarbone. Anuradhapura is still inhabited; the ancient city is today surrounded by monasteries covering an area of over sixteen square miles (40 km²). It is a UNESCO World Heritage Site.