The Masculine Paradox: Decoupling Masculinity from Heterosexuality in the Firehouse 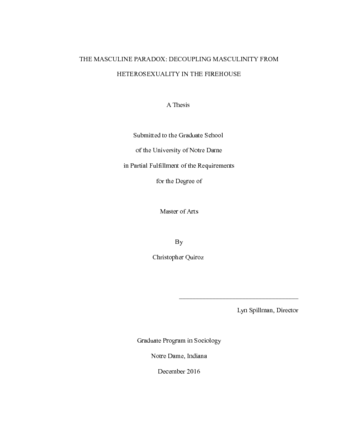 The relationship between hyper-masculine organizations and individual actions that violate heterosexual norms is explored in a study of the El Dorado Fire Department, a rural, wildland firefighting organization. The firefighters working at the station were able to engage in non-orthodox gender behavior because their masculinity stemmed from their status as firefighters rather than their individual actions. Men that breached heteromasculine norms were not perceived as less masculine as long as their legitimacy as firefighters remained intact. Furthermore, firefighters often used breaches in heteromasculine norms during their interactions because doing so fulfilled the greatest number of occupational objectives in comparison to other social interaction that occurred at the station.