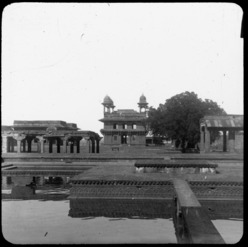 The lake is now dry.

Built near the much older Sikri, the historical city of Fatehabad, as it was first named, was constructed by the Mughal emperor Akbar beginning in 1570. (His “city” was largely a mosque and palace complex.) It remained his capital until 1580s; inadequate water supply forced the evacuation of the city in 1605. Two of the buildings of the palace complex are the Diwan-i-Aam (public audience hall) and the Panch Mahal, a five-storied palatial structure, the highest building of the civic area. The fifth level consists of a large domed chatri. Each of its five receding tiers is open on all sides; a place from which Akbar could see and be seen. Facing east, it may have been associated with the daily viewing of the emperor at sunrise, a practice that Akbar instituted.