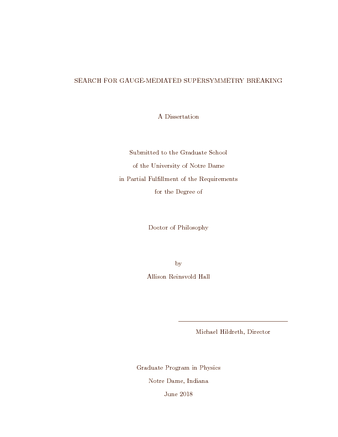 This dissertation describes a search for new physics in final states with two photons and missing transverse momentum. The analysis was performed using proton-proton collisions at a center-of-mass energy of 13 TeV. The data were collected with the Compact Muon Solenoid (CMS) detector at the CERN LHC in 2016. The total integrated luminosity of the data set is 35.9 fb^-1. The results are interpreted in the context of gauge-mediated supersymmetry breaking (GMSB). Supersymmetry (SUSY) is an attractive extension to the standard model of particle physics. It addresses several known limitations of the standard model, including solving the hierarchy problem and providing potential dark matter candidates. In GMSB models, the lightest supersymmetric particle is the gravitino, and the next-to-lightest supersymmetric particle is often taken to be the neutralino. The neutralino can decay to a photon and a gravitino, leading to final state signatures with one or more photons and significant missing transverse momentum. No excess above the expected standard model backgrounds is observed, and limits are placed on the masses of SUSY particles in two simplified GMSB models. Gluino masses below 1.87 TeV and squark masses below 1.60 TeV are excluded at a 95% confidence level.