Basilica of Saint Castor: Overall view of the west facade and towers with rhomboid roofs 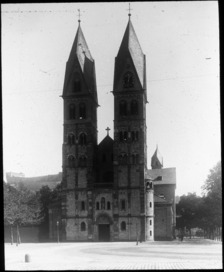 The oldest church in Koblenz, built between 817 and 836 by Hetto, the Archbishop of Trier with the support of Emperor Louis the Pious. Negotiations at the monastery of St. Castor in 862 led to territorial changes, which was part of the evolution of the Carolingian Empire into an Eastern and a Western Empire, from which the Holy Roman Empire (and eventually Germany) and France developed. The reconstruction of the church to its present shape and size began about 1160 under Provost Buvo. The steep gables of the rhomboid roof (rhombendach) on the western towers were installed at the beginning of the 13th century. From 1496 to 1499, vaulting was installed to replace the Romanesque roof. At the same time, two star vaults were erected in the nave and above the altar. Pope John Paul II raised St. Castor to a basilica minor on 30 July 1991.