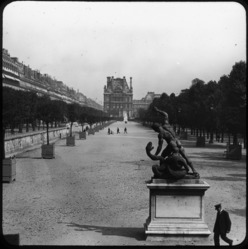 The bronze statue (Hercules Battling Achelous in the form of a Serpent [814-1824] by François Joseph Bosio), has been moved to the Cour Puget of the Louvre.

Le Nôtre’s career was doubtless determined at an early age, since his grandfather, Pierre, and his father, Jean, were both royal gardeners, who worked principally at the Palais des Tuileries. When his father retired in 1637, he was allowed by Louis XIII to pass on to his son his title of Premier Jardinier du Roi au Grand Jardin des Tuileries, so putting Le Nôtre into the employ of the King. It is a public garden located between the Louvre Museum and the Place de la Concorde. Created by Marie de Medicis as the garden of the Tuileries Palace in 1564, it was first opened to the public in 1667, and became a public park after the French Revolution.