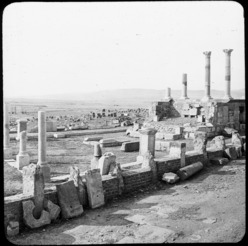 Beyond the Timgad arch, to the right, lay the temple of the genius of the colony. “Genio Coloniae Thamug,” found on an inscription on an altar. It had an irregularly shaped court with a colonnade containing statues of a number of gods. In ancient Roman religion, the genius was the individual instance of a general divine nature that is present in every individual person, place or thing (Genius loci applied to places).