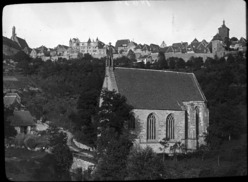 German town in Middle Franconia, Bavaria, with a population of 12,500, lying on a plateau 100 m above the River Tauber on its right bank. It is remarkable for being preserved as a complete 16th-century town bearing little evidence of later centuries, and for its intact fortifications (12th-14th century). The town became an Imperial Free City in 1274. The town was bombed in March of 1945, destroying 306 houses, six public buildings, nine watchtowers, and over 2,000 feet (610 m) of the wall. After the war, the residents of the city quickly repaired the bombing damage and tried to keep the historic character of the town, which is now popular with tourists.