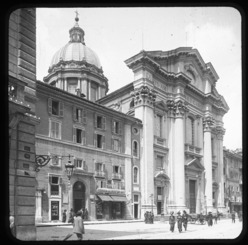 It is dedicated to Saint Ambrose of Milan and Saint Charles Borromeo. Its construction was begun in honor of the canonization of St. Charles Borromeo in 1610, under the direction of Onorio Longhi and, after his death, of his son Martino Longhi the Younger. It is chiefly remarkable for introducing such north Italian (Lombard) features as the continuous ambulatory (reminiscent of Milan Cathedral) into the mainstream of Roman architecture. The dome, resembling that of Santi Luca e Martina, was designed by Pietro da Cortona (1668), who was also responsible for the apse and rich internal decorations. The façade was designed by Cardinal Luigi Alessandro Omodei, who did not like the project prepared by Carlo Rainaldi.