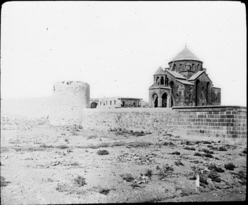 Echniadzin, meaning “The Descent of the Only Begotten Son” is an ancient capital located in Armenia. The Cathedral was erected in the 4th century by King Trdat III and Saint Gregory the Illuminator. It was built on top of a pagan temple that had been destroyed by King Trdat. The existing cathedral was rebuilt around 480 AD on the four bases that had survived from a 4th century cruciform basilica. The Cathedral’s present dome and belfry on the western side date from the 17th century. The Cathedral is included in the UNESCO World Heritage List. (Armenian Trip.)

The Cathedral is the most important center of the Armenian Apostolic church. It is located in the city of Vagharshapat, Armenia.