Windsor Castle: View from the Lower Ward looking uphill towards the Round Tower 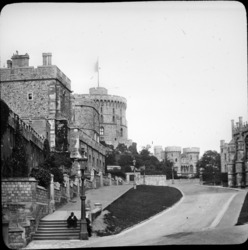