Nantes Cathedral: Tomb of Francis II, Duke of Brittany and of his wife Marguerite de Foix 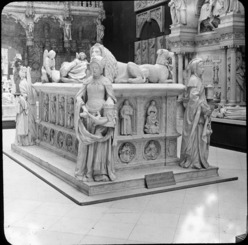 The original is in Nantes Cathedral. Large scale plaster cast collections (such as the Cast Court of the Victoria and Albert Museum) were very popular ca. 1870-1910.

The construction of the cathedral began in 1434, on the site of a Romanesque cathedral, and took 457 years to finish, finally reaching completion in 1891. The first architect in charge was Guillaume de Dammartin who was later replaced by Mathurin Rodier. The construction began with the west façade, the aisles of the nave and its lateral chapels. Most of the stained glass dates from ca. 1500-1516. The rest of the north transept and the choir, under the direction of St. Felix Seheult (city architect), were finished between 1840 and 1891.