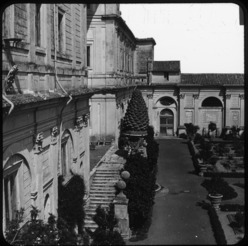 The 1st century Roman bronze Pigna (“pinecone”) in front of the exedra (“niccione”), gives the name Cortile della Pigna to the highest terrace; it was an ancient fountain moved to the site in the 15th century.

The main adjunct to the Vatican Palace designed by Bramante is the colossal extension known as the Cortile del Belvedere, on which work began in the spring of 1505. The design was modified by Pirro Ligorio before its completion (ca. 1565) and altered by Domenico Fontana (1587-1588). At the time of its construction, the Belvedere was the largest building built in Rome since the Ancient Romans. It now houses various Vatican museums. “Bramante’s original plan included a huge courtyard on three levels flanked by arcaded buildings, with a theater at the lower end and a museum for classical antiquities closing the upper court. Only the first storey was completed to his designs (much altered later).” p. 45