Dome of Saint Peter's: View of the dome showing clock at corner of facade 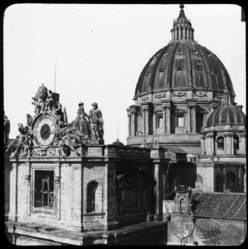 The cupola was probably not included on Michelangelo’s 1547 model, and it was not until 1558 that the carpenters began work on the larger-scale model (1:5; Rome, Vatican, Mus. Stor. A. Tesoro S Pietro) for the drum and dome, which Michelangelo justifiably felt to be the last task of his life (he was then 83). Whereas Bramante and Antonio da Sangallo (ii) had favoured an all'antica single-shell dome, Michelangelo’s was to be composed of two hemispherical shells. His starting-point for the double shell–and the design in general–was Brunelleschi’s cupola of Florence Cathedral (he had made an unexecuted project ca. 1520 for the completion of its drum; Saalman, 1978). Even closer to Brunelleschi’s cupola was Giacomo della Porta’s dome as built, with its pointed profile, but despite the changes he introduced he retained most of the salient features of Michelangelo’s concept. Particularly impressive is the vertical correspondence of the 16-sided lantern and drum, connected by the emphatic ribs of the dome.