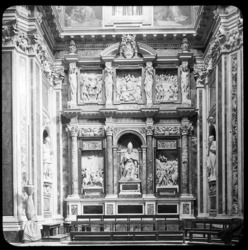 Ponzio was responsible for construction of the Pauline Chapel (1605-1611) in S Maria Maggiore. Clement’s tomb was executed 1611-1613. Figure of Clement VIII was carved by Silla da Viggiu and the cornice figures by Pietro Bernini; features “The Peace of Henry IV and Philip III” by Ippolito Buzi and “The Coronation of Clement VIII” by Bernini, “The Canonization of St. Giacinto and St. Raimondo” by Giovanni Antonio Valsolde, “The Occupation of Ferrara” by Ambriogo Bonvicino, and “Invitation of the Troops in Hungary” by Camillo Mariani.