Mezquita: Exterior, facade with minaret reused as a bell tower 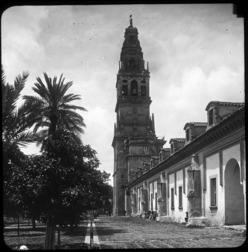