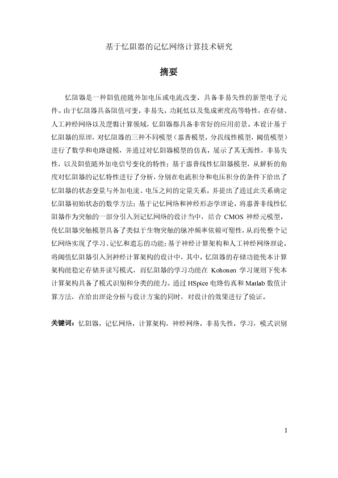 The memristor is a new-type electronic component, which can vary its resistance according to applied voltage or current, and is non-volatile. Since the memristor is resistance changeable, non-volatile, power-efficient and high-density integration friendly, it is very promising in areas like storage, artificial neural networks and logic computation. Based on the principle of memristors, the design models three different types of memristors (Hewlett Packard memristor, piecewise linear memristor, threshold memristor) in respect of mathematics and electricity, and shows memristors’ passivity, non-volatility and electric-controlled resistance variability by a simulation of memristor models; based on Hewlett Packard’s linear memristor model, the design analytically analyzes memristors’ memory properties, presents the quantitative relationship of memristors’ state variable, applied current and voltage under the conditions of current integral and voltage integral, and demonstrates the mathematical method to determine the initial state of memristors from this relationship; based on the theory of memory network and neuromorphic engineering, the design introduces Hewlett Packard’s nonlinear memristors, as a part of synapses, into the design of memory networks, combined with CMOS neuron model, causing the memristor synapse model to capture the Spike-rate-dependent-plasticity, a feature of biological synapses, hence leading to the learning, memory and forgetting functions of the whole memory network; based on the theory of neural computation architecture and artificial neural networks, the design introduces threshold memristors into the design of neural computation architecture, where the storage function of memristors can lead to stable storage and pattern reading and writing of the computing architecture, and the learning function of memristors, under the Kohonen learning rule, gives rise to the pattern recognition and classification abilities of the computing architecture. While theoretical analysis and design scheme are proposed, the performance of the design is examined by HSpice circuit simulations and Matlab numerical calculations.

This DOI is the best way to cite this senior thesis.