The Professions of Soldiers: A Critical Examination of the Assignment of Military Tasks Since World War II 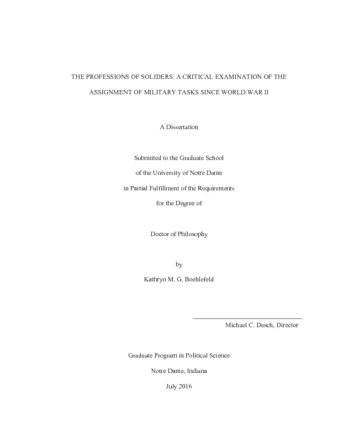 Since the end of the Second World War in the United States, an increased number of public sector employees and private contractors have been engaged in tasks that historically were the sole purview of the soldier. Why do civilians gain responsibility for some military tasks, the military for others and for still others there is a mixed outcome? The literature on private security companies examines the role of civilians in military operations, while the literature on military professionalism examines the role of soldiers in military operations. In this dissertation, I bridge the gap between these two literatures by considering civilian and military professions on equal terms: I suggest civilian professionals compete with one another over military tasks to be recognized as expert authorities on these tasks. If a profession has a significant comparative advantage, then it will be considered the expert authority on the task. To test this theory, I use a combination of congruence testing and process-tracing in two case studies: nuclear weapons strategy, 1945-1960 and countering insurgents in Vietnam, 1960-1968.