Logos and Phenomenon: A Reappraisal of Merleau-Ponty's Philosophy of Language 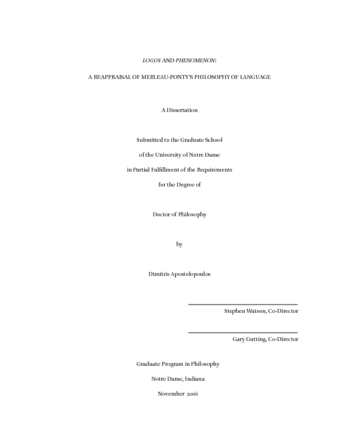 Maurice Merleau-Ponty’s (1908-1961) chief philosophical contributions are often thought to pertain to the philosophy and phenomenology of perception. Through a historical study of the development of his thought, and a systematic analysis of its central claims, this project shows that his work contains rich and under-appreciated reflections on the philosophy of language, which are of key consequence for understanding his thought and the broader phenomenological movement.

Already in The Structure of Behavior (1938/1942), Merleau-Ponty struggles to define the role of language in phenomenology. This attempt continues in Phenomenology of Perception (1945) and is sharpened in his exploration of literary, scientific, and philosophical expression during the writing of The Prose of the World (ca. 1952). It eventually becomes a problem of central philosophical importance in the various projects he pursues in his later work, and especially in The Visible and the Invisible (ca. 1958-1961). Merleau-Ponty’s abiding interest in questions of language demonstrates that his philosophy of language is indispensable for properly understanding even non-linguistic arguments and concepts that are central to his work, and shows that it must take on a privileged role in appraising the broader development of his thought.

In addition to demonstrating that central concepts of Merleau-Ponty’s work originate in and depend on research in the phenomenology of language, among them, the concept of ‘form,’ the account of the phenomenological cogito, key elements that make up the concept of ‘the flesh,’ and his unique understanding of philosophical ontology, the findings of this study also reveal that one of his lasting contributions is to have given us the first systematic understanding of phenomenology that gives as much primacy to language as it does to vision or intuition. Merleau-Ponty reminds us that, in keeping with its more basic meaning, phenomenology is also the logos of phenomena, the linguistic account of appearance. The implications of this insight extend beyond the confines of Merleau-Ponty’s work, and touch the heart of the phenomenological enterprise and the philosophy of language.